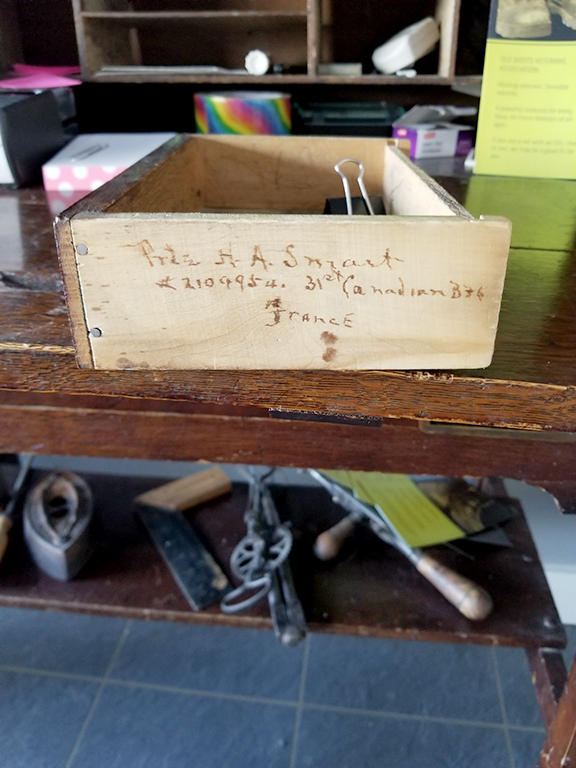 This is the story about finding Harold Anson Smart’s Grave. About twelve years ago, at an auction, an old walnut secretary caught my eye. It had lost several of its cubbyhole drawers and had clearly been well used. 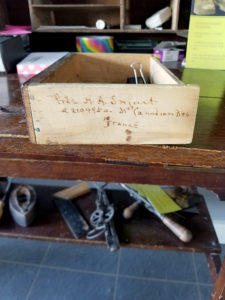 I Immediately decided to obtain it, and for the sum of $120.00 the desk came to rest in its new home, my office.

Some have suggested getting it cleaned up and restored to its original glowing condition, but it has never felt right to spiffy it up, I think it’s fine as it is. 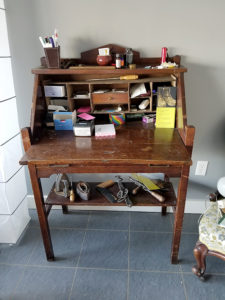 A while later, a friend sent the info off to Ottawa, and lo and behold, I have his service record. He was Harold Anson Smart from Sedgewick, Alberta. He joined the military in 1917 and was killed in action on 12 October 1918, at the age of twenty-five. Thanks to the clerks of the military, their work is so precious.

Over the years I have opened the drawer and told the story to many military and veteran clients. When I told one client of a planned trip to France, he suggested I look for Harold Anson Smart’s grave. With some searching online, I quickly found his burial site and even the exact plot number of his grave. Smart rests in plot F37, Centyme Cemetery, Nord, France.

Since I had planned to rent a car and travel to Caen, Vimy, Ypres, and Dunkirk, it was not hard to adapt my plans. One of the marvels of GPS voices is that they don’t get angry and yell at you when you make sudden detours. One detour I made was to another, unexpected gravesite, marked by a discreet Canadian sign and arrow. Abruptly turning right, I found myself apparently heading into a barn and farm field. As I pondered, I saw a muddy track and headed up it, wondering how my rental car would react. And there, up and around a muddy bend, was another gravesite. Well-tended cared for. There were fresh horse hoof prints in the mud. It seemed fitting since horses were used in WW1. And the battle referred to was unknown to me, but well described in the information stand. Eventually, the GPS and I got to a sign, again discreet, and an arrow, Centyme Cemetery, Nord, France, was there on my left. There was almost nowhere to park, but I squeezed in beside the road. Another cemetery I saw was only a foot from the pavement. 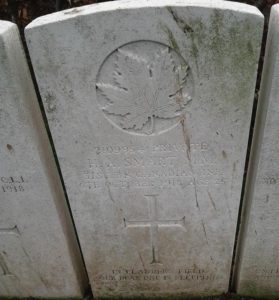 And there he was, Harold Anson Smart. His stone is faded, but clearly legible still. Some grass stains are on it, and that comforted me, to know that life continues around us, even in death. The graves are well cared for and the unmarked graves obviously get the same care as the known graves. As I looked over the fields of France I stood with my hand on his stone, tears streaming down my cheek. Here thousands of men gave their lives. I could imagine the fields teeming with fighting, shooting, screaming, dying. Now the fields are full of mustard just starting to bloom. It’s hard to describe how profoundly moving it was to stand there, walk there. There are tractor tire marks just beside the fence, again signs of life.

These parts of the world have seen so many centuries of war and as a Canadian, we go away from home to fight. As I stood there I imagined the many military men and women I know and have known, and it could have been any one of them in that grave, except for the time of that war.

Telling the Story Upon My Return

Upon my return, telling the story of finding Harold Anson Smart’s grave to the veterans I am privileged to have come to my office, there is a deep silence that descends. And we reach out and gently rub the desk, and acknowledge that there are no words, sometimes just a few tears and a hug.

Likely I will search for the family of Harold Anson Smart and share some of these images with them. And if a family member asks for the desk, that is OK.