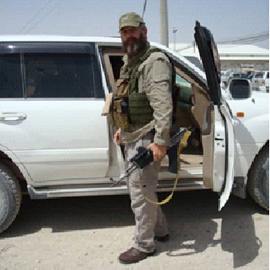 I was an army combat engineer for 28 years through various postings in Ontario and western Canada. I was deployed into zones of conflict on several operational tours, and ended my military career having been the RSM of 1 Combat Engineer Regiment in Edmonton, and the first RSM of the Canadian Manoeuvre Training Center in Wainwright AB. Immediately upon retirement from the army I returned to Afghanistan, and worked there for 5+ years in security and engineering for various governmental and private entities in direct support of the ISAF agenda, and all of that time outside the wire.
I met Liz Massiah many years ago while she was providing treatment for operational stress injuries for many of my soldiers. We maintained contact over time and distance, and I was very grateful for her keeping in touch while I was working in Afghanistan. Liz contacted me a few years ago to see if I would be interested in contributing to Old Boots, and because I had always done what I was able to do to help soldiers with invisible wounds while I was wearing the uniform, and because I have immense respect for Liz, I was happy to become part of the Old Boots team, and I’m very happy that I did.
Old Boots works, it’s that simple. If you or anyone you care about are dealing with operational stress injuries, and you think that being able to express yourself in complete honesty with a group of safe and supportive folks who truly “get it” because they’ve walked in your boots, Old Boots may be for you.